I do not reside in the United States

I am a health

This is me, continue

I am not a health

This is me, continue

I am a health

I am practicing from: 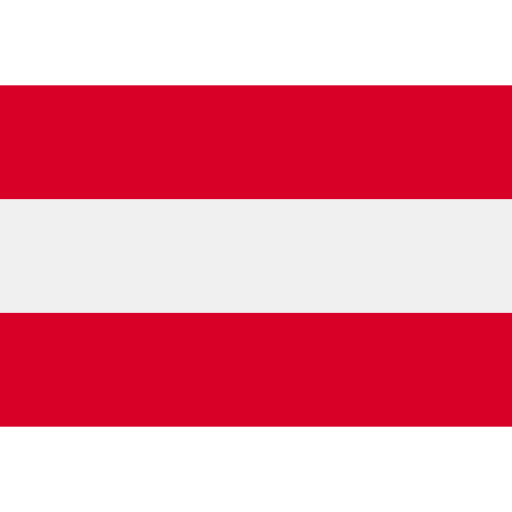 Back to options
Continue

I am not a health

I am residing in:

Back to options
Continue

Passwort Vergessen
Please select one of the below options!
Veltassa is not available in your country,
please proceed.
Back to options
Continue

AAV is a rare, severe small vessel vasculitis that affects multiple organs and has a high acute mortality risk.1

AAV is a rare disease2

GPA (Granulomatosis with Polyangiitis, previously called Wegener’s) and MPA (Microscopic Polyangiitis) are the most common clinical subtypes of AAV2 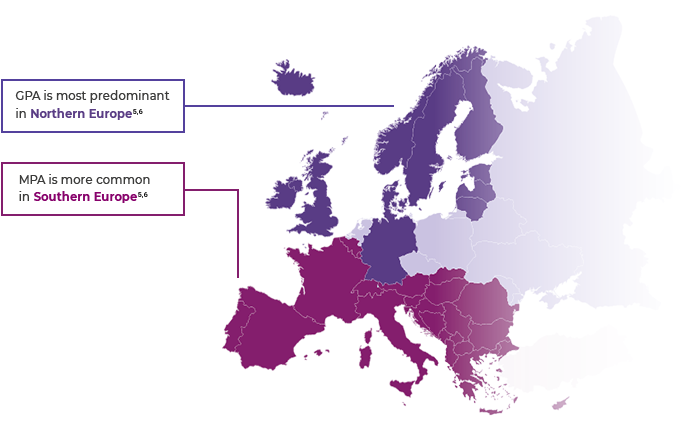 AAV can result in systemic organ damage and failure, with the kidney and lung as major targets1,2

AAV can result in damage to vital organs such as the lungs, kidneys, nervous system, gastrointestinal system, skin, eyes and heart.3 Both GPA and MPA show a lot of clinical commonality, whereas EGPA (Eosinophilic Granulomatosis with Polyangiitis, previously called Churg-Strauss syndrome) is distinctly different.2

As many as 23% of PR3- and MPO-ANCA positive patients who require RRT at the time of diagnosis die within 6 months and 29% do not regain renal function.4* In patients with renal involvement at diagnosis, ESRD occurs in 13% of PR3- and MPO-ANCA positive patients within 3 years of diagnosis.5† Compared with a short prodromal phase, patients with a long prodromal phase (>22 weeks between first AAV symptoms and diagnosis) are more likely to have proteinuria present at 6 months and are at double the risk of 3-year ESRD, which underlines the importance of early diagnosis in order to improve renal outcomes.5† 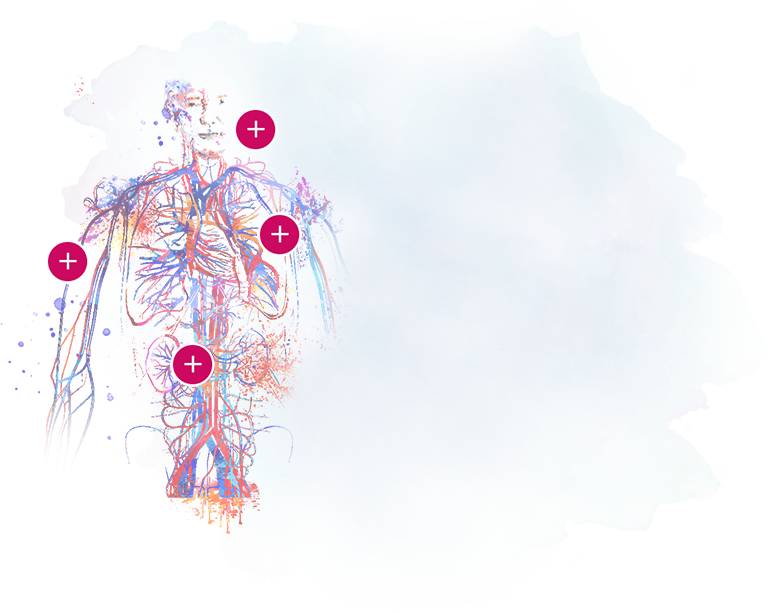 MPA: Not specific, not destructive, not
granulomatous

AAV leads to an increased risk of mortality, especially in the first year after diagnosis1*

Half (50%) of mortality in the first year
is due to treatment-related infection.1

In clinical trial settings, the cumulative survival rate at 2 and 5 years in patients with newly diagnosed GPA and MPA is 85% and 78%, respectively.2†

Population-based data suggest that the long-term mortality rate in patients with AAV has improved considerably over the past two decades, but is still not as good as matched controls.3‡

In a study following individuals for a median 5.2 years, the mortality rate in incident GPA or MPA patients receiving current treatment was 2.6 times higher than an age- and sex-matched general population (p<0.0001).2† 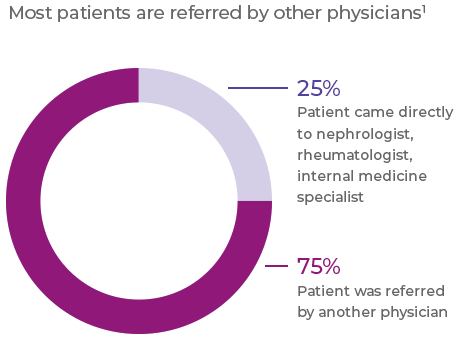 Many patients have renal disease at presentation, but general non-specific referral symptoms predominate1

Comorbidities at diagnosis are common (65% of patients)1

The relative rarity and non-specific presentation of AAV can lead to a delay in disease diagnosis of more than 6 months in one-third of patients.2

Diagnosis of AAV and differentiation into the GPA, MPA or EGPA subtype depends on the patient’s clinical symptom constellation, the results of imaging studies, and laboratory investigation.2,3

Due to the linkage of anti-PR3 with GPA and anti-MPO with MPA, ANCA testing is critical for diagnosis.2–6

An organ biopsy, usually renal, is often performed to confirm the diagnosis. 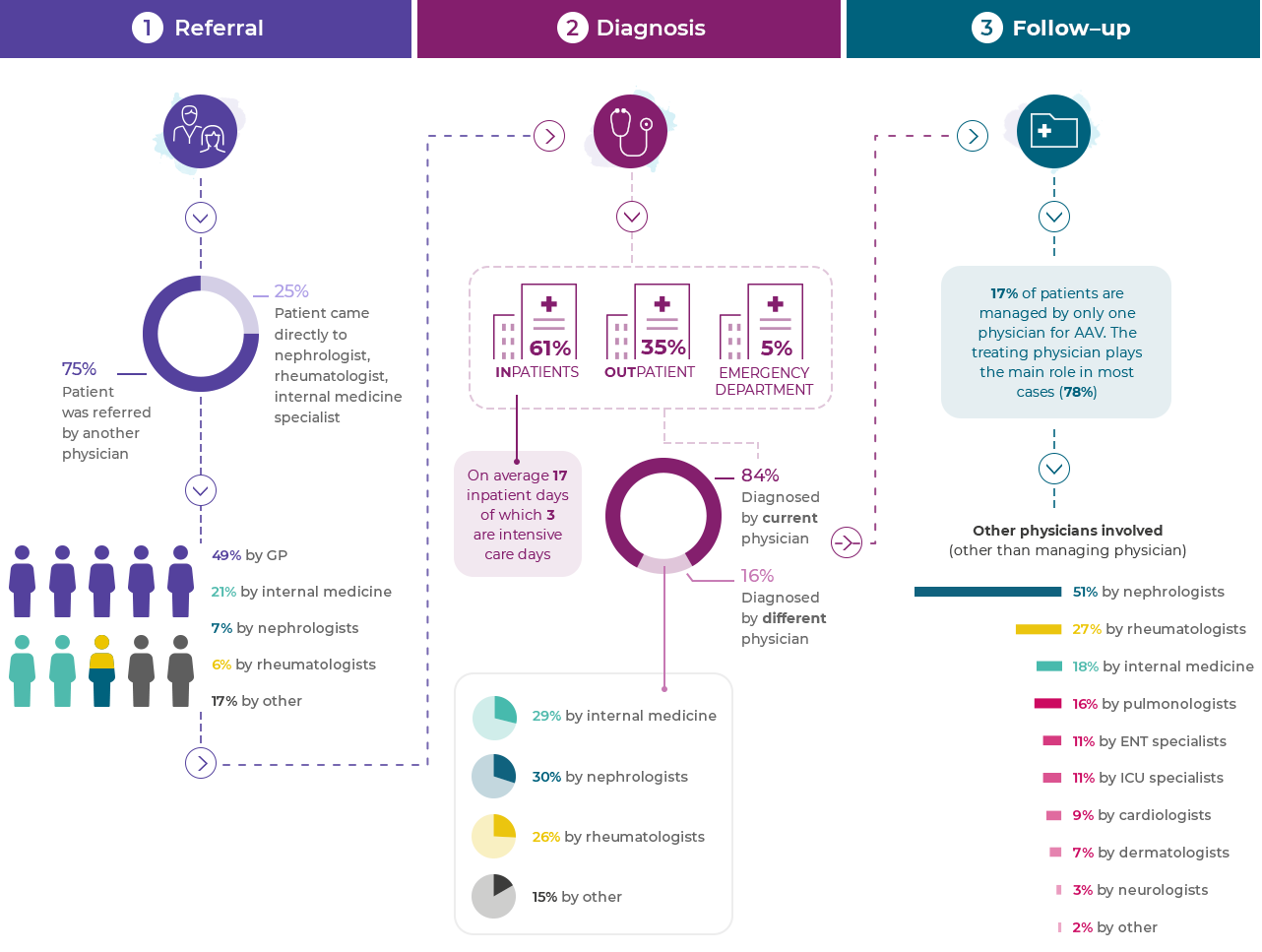 EGPA is distinctly different from GPA and MPA1

EGPA (Eosinophilic Granulomatosis with Polyangiitis, previously called Churg-Strauss syndrome) is rarer than either GPA or MPA.2 In patients with EGPA, peripheral neuropathy is very frequent and almost all patients have asthma. ENT manifestations are frequent, but the kidneys are not commonly involved. In EGPA, ANCA are most commonly directed against MPO. However, over 60% of EGPA patients are ANCA negative.1

These individuals may have more frequent cardiac involvement, with less renal or peripheral nerve contribution.1 The absence of granuloma helps to differentiate MPA from GPA and EGPA.1,3 The presence of granuloma, the symptoms experienced, the organs involved and the type of ANCA differentiate GPA from EGPA.1,3 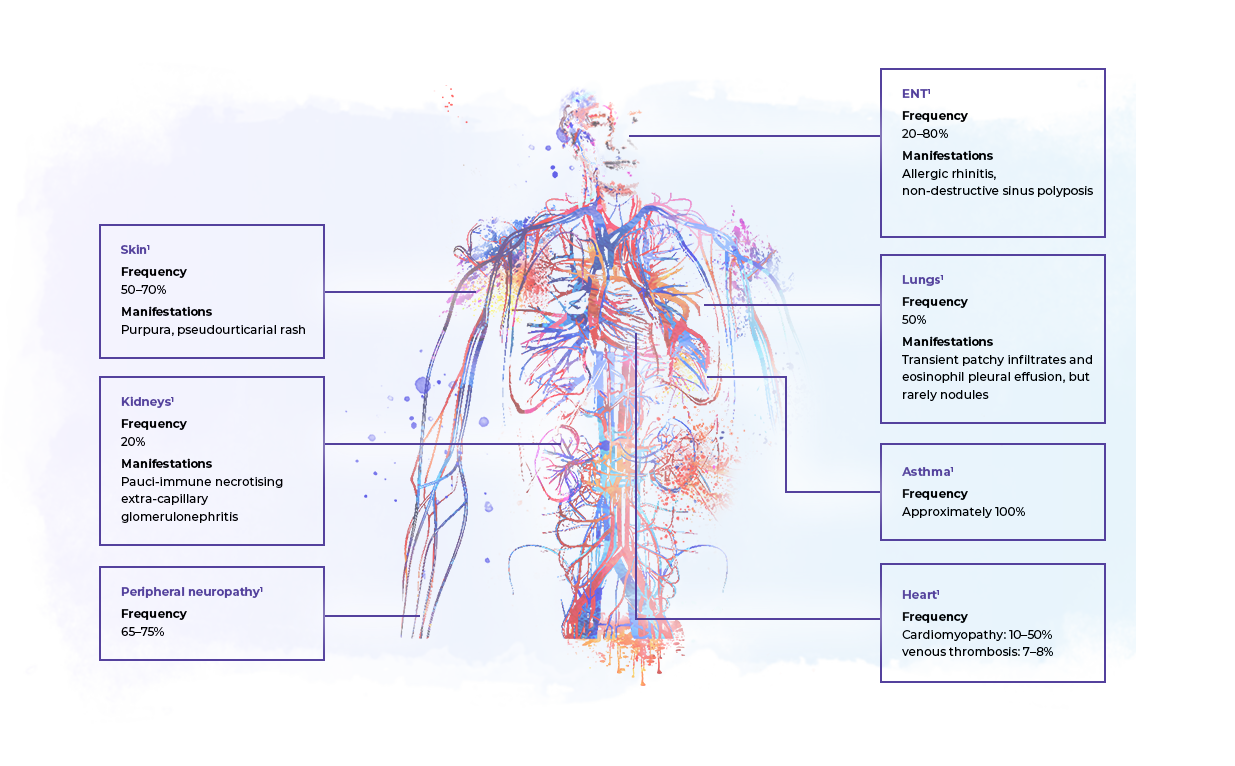